And they who for their country die shall fill an honored grave,
for glory lights the soldier’s tomb, and beauty weeps the brave.
~Joseph Drake

For many of us–and, I’m ashamed to admit, myself included–Memorial Day has come to represent nothing more than a day off from work, the last day of a three-day weekend and the unofficial kick-off to summer.  It’s a day for relaxing on the water or the back lawn and a day for grilling burgers, cranking up the homemade ice cream maker, and slicing into the season’s first juicy-ripe watermelon.  For others, Memorial Day, originally referred to as “Decoration Day,” is a time for visiting the cemeteries where their loved ones are buried and decorating their graves with flowers.   And for even fewer Americans, Memorial Day is a time for remembering and honoring those military personnel who have died in service to our country. In fact, I’m guessing that many members of the younger generations don’t even realize that such remembrance of fallen heroes was the original intent of Memorial Day.

Decoration Day was first observed in the United States on May 30, 1868, a date chosen because it wasn’t an anniversary of any particular battle.  On that first day of remembrance, flowers were placed on the 20,000 Confederate and Union graves at the recently created Arlington National Cemetery, and General James Garfield spoke before the 5,000 participants decorating the graves. And while Decoration Day, which gradually came to be known as Memorial Day, originally honored only those soldiers who served during the Civil War, over time the holiday evolved to recognize American military personnel who died in all wars.

In 1968 Congress passed the Uniform Monday Holiday Act, which established Memorial Day as a federal holiday on the last Monday in May, thereby creating a three-day weekend for federal employees; the law went into effect in 1971. 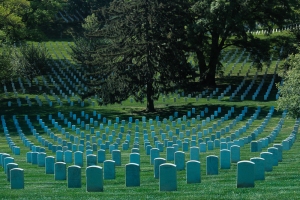 During my recent, first-ever trip to Washington, D.C. (please refer back to my earlier post, “I’m Still Smiling,” for more details), I was fortunate to spend several early morning hours walking through the historic Arlington National Cemetery.  I was surprised to encounter such tremendous beauty and quiet peacefulness on its 624 acres of winding paths and tree-shaded hillsides–and even more surprised by the overwhelming humility and gratitude I felt as I walked through those hallowed grounds and by the sheer joy and admiration I experienced as I watched the Changing of the Guard ceremonies at the Tomb of the Unknowns.  Of all the places I visited in D.C., Arlington was among my favorites. 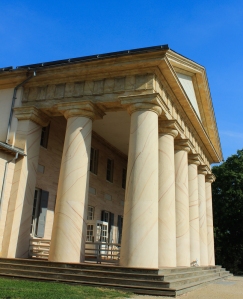 Arlington National Cemetery was built during the Civil War on the grounds of what was formerly the estate of the family of General Robert E. Lee’s wife Mary Anna (Custis) Lee. The Arlington House estate was originally confiscated by the government for failure to pay back taxes, but when the Supreme Court ruled that the Lee family had not been afforded due process, the estate was returned to them–and a year later they sold it back to the government.  (Legend has it that Mrs. Lee refused to return to the property after learning that Confederate soldiers had been buried beneath her rose garden.)  More than 260,000 military gravesites currently dot the hillsides at Arlington, with approximately 27-30 funerals held there each weekday.

One of the most frequently visited gravesites at Arlington is that of President John F. 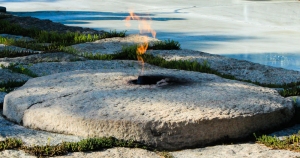 Kennedy, who is buried there with his wife Jacqueline and two of their infant children on the hillside below the Arlington House.  The John F. Kennedy Eternal Flame, which was requested by Mrs. Kennedy, is the most distinguishing characteristic of his memorial, which also includes a circular walkway surrounded by low walls inscribed with quotes from some of Kennedy’s more famous speeches.  Interestingly, even though serving as President of the United States qualifies one for burial at Arlington, only two former presidents are buried there–Kennedy and William H. Taft.

It was hard for me to contain my emotions as I watched the Changing of the Guard ceremony at the Tomb of the Unknowns–truly a humbling, awe-inspiring event that I wish all Americans could someday witness.  My host/tour guide had seen the ceremony enough times that he knew exactly where to position my travel companion and me for the best photo opportunities, and afterward he provided an abundance of interesting background information for what we had seen.  I could not have asked for a better experience, and the tears that had been threatening during the ceremony were immediately replaced by goofy-grinned joy for the simple gift I had just been given. 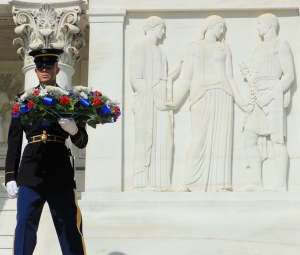 On March 4, 1921, Congress approved the burial of an unidentified World War I soldier (“In Honored Glory an American Soldier Known But to God”) in The Tomb of the Unknown Soldier.  Eventually other unknown servicemen were also interred there–one from World War II, one from the Korean Conflict, and (until 1998) one from the Vietnam War–and the site became known instead as “The Tomb of the Unknowns,” although it has never been officially named.  The site opened to the public on April 9, 1932.  In 1998, through DNA testing the remains of the Vietnam Unknown were positively identified as those of Air Force 1st Lt. Michael Joseph Blassie, and his remains were exhumed and returned to his family–and because of DNA testing it is unlikely that any other “unknowns” will be interred in the Tomb in the future.  The remains of the dead soldiers symbolize all the unknown dead, wherever they fell, and since their identity is unknown, the Tomb could theoretically be the tomb of anyone who fell in service to our country.

The Tomb of the Unknowns has been guarded continuously, 24 hours a day, 7 days a week, 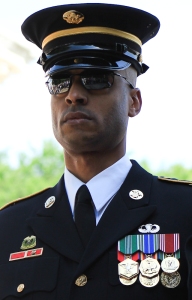 The physical and mental demands of the job can be very challenging.  The Tomb Guards work on a team rotation of 24 hours on, 24 hours off, for five days, taking the following four 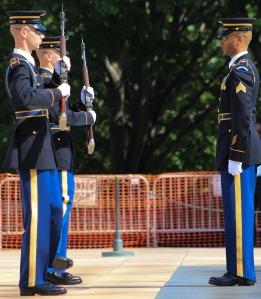 days off.  During summer days the guard is changed every half hour; during winter days the guard is changed every hour. After the cemetery closes in the evenings, the guard is changed every two hours.  Each guard takes an average of six hours to prepare his heavy wool uniform for the following day. There are no wrinkles, folds or lint allowed on the uniform (as can be seen in the crispness of the uniforms in the pictures).  In addition to preparing their uniform, guards also participate in physical training, Tomb Guard training, and field exercises–and cut their hair before the next work day.  They are also required to memorize 16 pages of information about Arlington National Cemetery and the Tomb of the Unknown Soldier, including the locations of nearly 300 graves.

The guard “walking the mat” in front of the Tomb does not wear rank insignia on his uniform so that he does not outrank the Unknowns, whatever their rank may have been.  The guard also carries his rifle on the shoulder away from the tomb.  He marches 21 steps 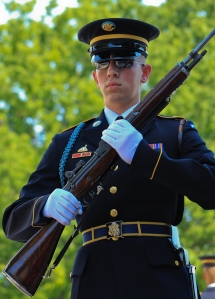 across the mat in front of the Tomb, which symbolizes the 21-gun salute (the highest honor given any military or foreign dignitary), before executing a crisp, 90-degree turn to face east for 21 seconds, then a sharp 90-degree turn again to face north for 21 seconds–at which time he places his rifle on the shoulder nearest visitors to signify that he stands between the Tomb and any possible threats.  (If I had known all these details beforehand, I would have been tempted to count the steps and seconds just to be sure!)  The mat on which the guards walk is typically replaced before Memorial Day and again before Veterans Day because of the wear on the rubber mat from the metal plates built into the soles and inner parts of the guards’ shoes, which allows them to “click” their heels during maneuvers.

Even though it has only been a little over a month since my visit to Arlington National Cemetery, I would gladly give up my grilled burgers and watermelon to be there again this 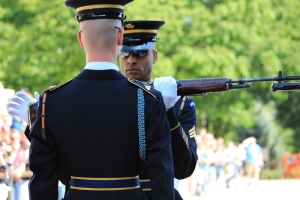 Memorial Day weekend to walk in silent reverence for our fallen military personnel.  Each year since 1948 in the days prior to Memorial Day the soldiers in the 3rd U.S. Infantry have placed small American flags in front of each of the more than 260,000 gravestones, and I can only imagine the emotions such a sight would induce (and what a beautiful picture it would make!).

And even though a return trip to Arlington is out of the question for this weekend, I do hope to tour it again someday.  Perhaps more than any other place I have ever visited, it renewed my pride in this great country, and it instilled in me an even greater appreciation of all the men and women who have chosen to serve this country and to fight for my freedoms.  Some have given their lives in that fight, but for all those remaining, especially all my friends, family members and former students who have served or are currently serving, please know that you have my love and respect.  Thank you. 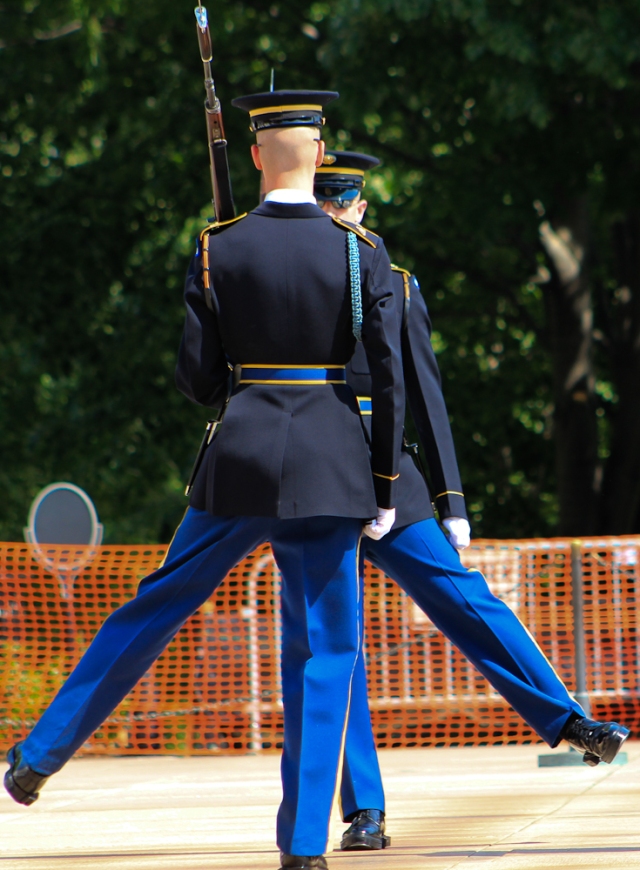 “One flag, one land, one heart, one hand, one nation, evermore!”
–Oliver Wendell Holmes

I have recently retired from a 30-year career in education in one of the best school districts in the world. I hope to spend my second life reading, writing, photographing, traveling, biking, cheering on my favorite baseball team (the St. Louis Cardinals), and soaking up glorious sunshine. In my spare time I enjoy playing with my pet tarantulas, trying out new flavors of chewing gum, and knitting socks for prison inmates. I'm almost positive that in a past life I was one of the Seven Dwarfs (most likely "Grumpy"), and in my next life I'm going to be either a taste tester for Hershey's or a model for Victoria's Secret's new line, "Bloomers for Boomers." I want to travel country back roads, singing Vanilla Ice songs at every karaoke bar and rating bathroom cleanliness at every truckstop. And someday I plan to own a private beach where skinny girls aren't allowed. I want to be a writer when I grow up. "Our truest life is when we are in dreams awake."--Henry David Thoreau
View all posts by icedteawithlemon →
This entry was posted in D.C., Gratitude, Patriotism, Photography, Uncategorized, Washington and tagged Arlington National Cemetery, Memorial Day, photography, Tomb of the Unknowns, Washington D.C.. Bookmark the permalink.