Posted on May 8, 2012 by icedteawithlemon

I didn’t snore.  I didn’t scream awake with a single leg cramp.  I didn’t drool in my sleep on the metro, and I didn’t get “accidentally” lost in the crowds.  I did, however, smile until my cheeks hurt, I did gaze in wide-eyed wonder at the surrounding beauty and magnificence, and I did walk almost 128 miles and burn off approximately 57,000 calories in a four-day period (or something close to that).

If you read my last blog (“A Secret Revealed, A Dream Taking Flight,” posted April 16, 2012), then you know I am referring to my recent, first-ever trip to Washington, D.C.  I was giddy when I left with a friend on our much-anticipated trip; I was awe-struck and humbled and inspired when I returned.

It has now been two weeks since that return, and I have tried repeatedly to write about the trip–to put into a couple thousand words a descriptive narrative of all that I saw and all that I felt–and I have finally come to the realization that I simply cannot do it.  Our kind host and mutual friend did an amazing job of mapping out our visit and making sure we visited as many sites as possible on our “must-see” list–while still allowing enough time at each location to thoroughly absorb all that it had to offer.  The resulting sensory overload, though, has made it impossible for me to write about the overall experience with an objective sense of detachment instead of the mushy-gushy sentimentalism I seem inclined to revert to.  And instead of focusing on the big picture, my mind keeps conjuring up the tiniest of details . . .

. . . I remember laughing at the realization that two women needed five suitcases (one devoted solely for the combined transport of shoes) for a four-day trip.
. . . I remember the nervousness of meeting our friend at the airport after so many, many years of not having seen each other.  Would we recognize each other after so long?  (As it turned out, two short blondes with five suitcases and two camera bags between them were easily recognizable.)  And would we know what to say to each other after that initial meeting or suffer through repeated bouts of uncomfortable silence?  (The conversation started flowing before the taxi left the airport and didn’t stop until the early-morning goodbyes four days later.)
. . . I remember walking to a nearby grocery store and being amazed at the selection (Fifteen different varieties of olives–seriously?  I thought there were just two kinds–black and green.) and also being shocked at how much more expensive the groceries were there than back home.
. . . I remember the comfort and ease and cleanliness of the metro.
. . . I remember walking and walking and walking–and then walking some more–and I remember thinking our friend’s interpretation of “It’s not much farther” was very different from my own.  I also remember being grateful that my bicycling had at least given me the endurance to keep on walking (and walking and walking) and the ability to keep up with my younger friends.
. . . I remember being grateful when our friend realized our energies were waning and hired a bicycle taxi to cart us around for the rest of the day.  I also remember feeling slightly guilty when three adults piled themselves and all their camera gear into a cart being pulled by one young man–but that guilt was soon replaced with admiration when young Matt and his tattooed calves sprang into action and muscled their way up inclines, around corners, and through traffic.  Admiration indeed.
. . . I remember soaking my tired feet in a hot foot bath while sampling five different kinds of gelato out of the same bowl and thinking this just might be the closest I would ever come to experiencing heaven on earth.
. . . I remember hearing someone else snoring in the middle of the night and smiling because it wasn’t me.
. . . I remember being treated to some of the best Chinese food I have ever eaten.
. . . I remember being awakened by Murphy, our friend’s dog, licking me in the face–and laughing until I realized Murphy had already been on his morning walk and then worrying about what he might have eaten on that walk.
. . . I remember looking around the room at the writer’s conference I attended and realizing that at least a third of the 200 participants were as old as (or older than) I.  And I remember realizing, after some of them introduced themselves, that a retiring English teacher who wants to be a writer is not so much an oddity as a cliche.
. . . I remember being stunned by the breath-taking beauty of Washington, D.C., and especially by the floral displays everywhere.  I had expected such beauty at the U.S. Botanic Gardens but not on every street and around every corner.
. . . I remember being amazed at the grandeur of all the memorials and realizing that no picture I could take would ever adequately convey their sheer massiveness.
. . . I remember being overcome with emotion at Arlington National Cemetery–being in awe of the soldiers on guard at the Tomb of the Unknowns, feeling so humbled by the men and women buried at Arlington, and feeling such a sense of gratitude toward them as well as toward the leaders who had seen fit to give them such a beautiful, peaceful resting place.
. . . I remember the joy of visiting such places with fellow photographers who never once expressed impatience, and I remember being entranced as we reviewed each other’s photos on the television screen at midnight, noting how sometimes our perspectives were identical and sometimes our individual styles made our perspectives completely different.
. . . I remember being welcomed by our friend’s friends throughout the weekend and the comfortable ease with which new friendships were formed.  I also remember the Sunday afternoon spent at Barrel Oak Winery–and how sampling its award-winning wines and dining on cheese and crackers and olives and cheesecake was a relaxing, enjoyable way to celebrate the near-end of our whirlwind trip.

And I remember leaving Washington, D.C., tired and weary (so much so that I dozed off before our plane ever left the tarmac)–but also with a renewed pride in and fascination of this beautiful country and its rich history, with the warm glow of wonderful friendships cemented, and with the determination to make a return visit (and another and another) to visit all the places I didn’t see this time (and to visit some of the same places again).  When I got back home, so many of my friends asked about my trip, and it was–and still is–hard for me to adequately describe.  To many of them, I simply responded, “I smiled for four days straight.”

Below are just a few of the approximately 1,500 pictures I took during my visit to Washington, D.C., and the surrounding area.  Two of my favorite sites were Arlington National Cemetery and the U.S. Botanic Garden, and I’m planning separate posts focusing just on those sites . . . so stay tuned.

I was fascinated by the precision and dedication of the soldiers at the Changing of the Guard ceremony at the Tomb of the Unknowns, Arlington National Cemetery.

This is inside at the U.S. Botanic Garden, one of my favorite places in D.C. (and on my list of places to visit again). 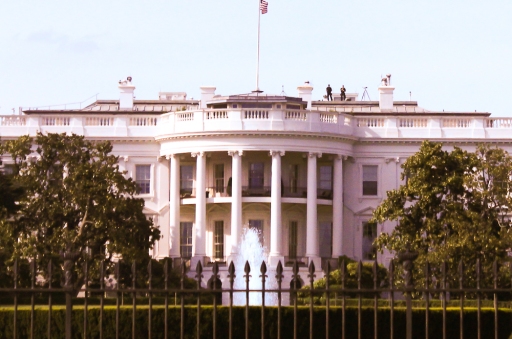 This is a distant view of the White House. 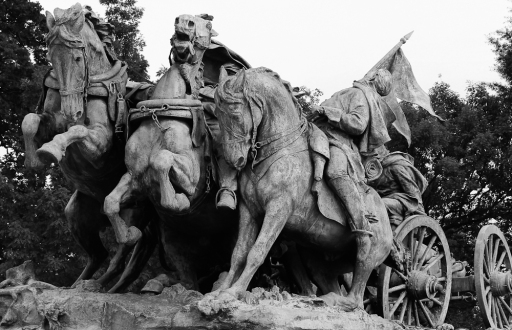 Of all the statues in D.C., this one at the Ulysses S. Grant Memorial was my favorite.

This is a view of the Capitol Building as the storm clouds were rolling in.

The ghostly statues of the Korean War Veterans Memorial created an eery sight in the early morning.

My favorite memorial was the Franklin Delano Roosevelt Memorial, which included four open-air rooms and several waterfalls, statues, sculptures and 21 FDR quotes inscribed on the walls. This statue, titled “Fala and Franklin D. Roosevelt,” is based on depictions of an aging, sick Roosevelt, and it stirred controversy over the issue of his disability. Designers decided against plans to have FDR shown in a wheelchair. Instead, the statue depicts the president in a chair with a cloak obscuring the chair, showing him as he appeared to the public during his life. Roosevelt’s reliance on a wheelchair was not publicized during his life, as there was a stigma of weakness and instability associated with any disability.

One of my favorite views in D.C. was the Jefferson Memorial from across the Tidal Basin.

The Three Amigos at Barrel Oak Winery . . . me (in the middle) with fellow traveler Patty and gracious host Jamie.

I have recently retired from a 30-year career in education in one of the best school districts in the world. I hope to spend my second life reading, writing, photographing, traveling, biking, cheering on my favorite baseball team (the St. Louis Cardinals), and soaking up glorious sunshine. In my spare time I enjoy playing with my pet tarantulas, trying out new flavors of chewing gum, and knitting socks for prison inmates. I'm almost positive that in a past life I was one of the Seven Dwarfs (most likely "Grumpy"), and in my next life I'm going to be either a taste tester for Hershey's or a model for Victoria's Secret's new line, "Bloomers for Boomers." I want to travel country back roads, singing Vanilla Ice songs at every karaoke bar and rating bathroom cleanliness at every truckstop. And someday I plan to own a private beach where skinny girls aren't allowed. I want to be a writer when I grow up. "Our truest life is when we are in dreams awake."--Henry David Thoreau
View all posts by icedteawithlemon →
This entry was posted in D.C., Photography, Travel, Uncategorized and tagged Arlington National Cemetry, Barrel Oak Winery, photography, Tomb of the Unknowns, travel, U.S. Botanic Garden, Washington D.C.. Bookmark the permalink.