Mid-Night Ramblings (And You Thought YOU Were Weird)

Posted on September 16, 2014 by icedteawithlemon

It used to be (or so it seemed) that my every waking moment was spent trying to fulfill someone else’s needs. When my children were young, mornings were a chaotic rush of cereals poured, animals fed, permission slips signed, backpacks assembled, and missing shoes located. And mornings were easy compared to the hours that followed, hours of trying to spark an interest in the beauty and complexities of the English language, hours of writing curriculum guides and policy manuals, hours of soothing worried parents and answering to angry ones, hours of attending pointless meetings and supervising endless after-school activities.

And then came those few hectic moments between the end of the school day and the sweet relief of bedtime. Something passing as semi-healthy had to be served up for dinner, and then homework had to be checked, spelling words practiced, uniforms washed, and little boys comforted when little girls broke their tender hearts.

And if you’re a parent, you know exactly what I’m talking about.

And then I would stumble my weary bones to bed, where the demands of the day would provide a never-ending list of things to worry and fret over–resulting in prolonged glaring at the clock and punching the pillow before my over-charged brain would finally shut down for the few remaining hours of the night.

But that was then. These days my responsibilities are few, and my hours are, for the most part, leisurely and peaceful and slow. My children are happy, and my health is good. I watch the wildflowers blooming and the sun setting, and I sip my tea. Carefree days should lead to restful nights, right? I wish. Sometimes it’s a snoring grizzly that disrupts my slumber, and sometimes it’s the sudden, frequent urge to empty an itsy-bitsy bladder. Regardless, my crazy cranium, unencumbered by legitimate concerns, uses these middle-of-the-night wakings to dig up random snippets of memory and to invent all kinds of nonsense to ponder. Silly stuff. Weird stuff.

Sleep, sleep, sleep, sleep. I need to sleep . . . I wonder if there are any plastic surgeons who give group discounts–like, get four body parts lifted and get the fifth one free? And do body parts that come in pairs count as one or two? Can you mix and match procedures–buy two enlargements and two lifts and get a tuck free? Would they let me pay with weekly deliveries of cheesecake? Or would they simply look at me sadly and say, “Oh, honey, you should have come in YEARS ago.”? Wait . . . WHAT’S CRAWLING ON MY LEG??? “Crazy laughter in another room and she drove herself to madness with a silver spoon” . . .

Might as well get up and pee since I’m already awake . . . I only had one glass of water three hours ago–where does all this stuff come from? Wow, the floor’s freezing–but that cold air coming in through the open windows feels sooo good. Snuggling weather. Sweatshirt weather. Bonfires. Falling leaves. Chili. Ooh, maybe I should make some chili for supper tomorrow. I’ll have to go to the grocery store–better make a list . . .

How many frogs are in the chorus outside my bedroom window–dozens or hundreds? It sounds like hundreds. Are they mere feet away or scattered throughout the woods? And why do they stop singing sometime before dawn–do they individually drop off into slumber throughout the night (lucky frogs), or at some point does the lead singer signal the finale? Is there a lead singer? And if so, how was that decided–some kind of alpha male contest for domination in the froggy world, or was it just “all about that bass, ’bout that bass”? . . .

Geez, Louise, if someone could just collect the nightly sweat pools of hot flashers everywhere, there’d be enough water to douse the wildfires in California AND end the drought . . .

How many more games before the Cardinals clinch the National League Central Division? Because they ARE going to clinch it. And does anyone (coaches, wives?) ever tell ballplayers that they really shouldn’t be running the bases with a mouth full of sunflower seeds? I’d hate for someone to miss the post-season because he choked on a mouthful of shells while sliding into second . . . “John Jacob Jingleheimer Schmidt, his name is my name too. Whenever we go out, the people always shout, there goes John Jacob Jingleheimer Schmidt! Dah dah dah dah, dah dah dah” . . .

Yeah, biting into that red jalapeno from the garden just to see if it was really and truly hot probably wasn’t one of the brightest things I’ve ever done. My tongue is still on fire, and my lips are numb. Dumb, dumb, dumb. Good grief! How long does it take for chigger bites to stop itching? It’s been a month–enough already! . . .

Who decided we would shave our legs but not our arms, our chins but not our eyebrows? And what marketing guru thought watermelon and banana split Oreos were a good idea? If it ain’t broke . . . maybe that genius could better spend his time developing a tortilla chip hardy enough to withstand the amount of spinach dip I want to pile on it . . . And why do ads for dating Russian and Ukrainian women keep popping up on my email screen? What in the world have I clicked on in the past that has spawned algorithms indicating I am a senior man interested in East European buxom beauties? Hmm, maybe someone else was using my computer . . .

If at least one body part is always in motion–jiggling, wiggling, swinging and swaying–does that mean I’m always burning calories without even trying? “Hey kid, rock and roll, rock on, ooh, my soul. Hey kid, boogey too, did ya? Hey shout, summertime blues, jump up and down in my blue suede shoes.” I think even I could write song lyrics . . . and I wonder where my blue suede shoes are . . .

I wonder if I could pay someone to clean out all my jumbled dressers and closets–would it cost hundreds (thousands) of dollars? And would that person silently judge me for the disarray but at least sign a confidentiality agreement so no one else would know that I had 87 pairs of underwear and 27 bras all crammed into the same tiny drawer? . . .

Ahh, sweet, gentle rain, watering my garden so I don’t have to. Maybe I can get some raindrop pictures in the morning. Maybe the rain will wash all the tree sap and bird droppings off my car, too. Wait–did I mail off the car insurance payment? Wasn’t it due a couple weeks ago–or was that the phone bill? . . . “Listen to the rhythm of the falling rain, telling me just what a fool I’ve been” . . . and reminding my itsy-bitsy bladder that it’s time to get up again.

By the end of our lives, the lucky ones among us will have spent about one-third of our lives in restful slumber. And even though Thomas Edison thought sleep was highly over-rated, I tend to disagree with him. Maybe he–one of the greatest minds of all time–used those extra hours of wakefulness to invent motion picture cameras and commercial light bulbs and other such gifts to civilization, but I can assure you that no such benefits can be gained from my insomnia. A few more hours of sleep, though, might be the necessary ingredient for wiping away some of the weirdness bouncing around up there–but the world, most likely, will never know.

So what about you? What weird thoughts keep you awake at night, depriving you of the restful sleep you so desperately crave? (Please tell me you have weird thoughts.) Or are you one of those fortunate souls whose eyelids flutter shut when your head hits the pillow and remain blissfully closed until the alarm clock sounds? (I’ll try not to hate you.) 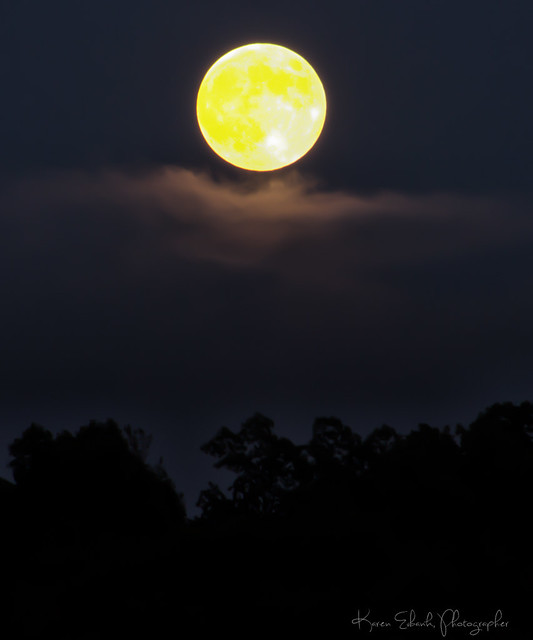 Sometimes I can blame that sleeplessness on the moon . . . 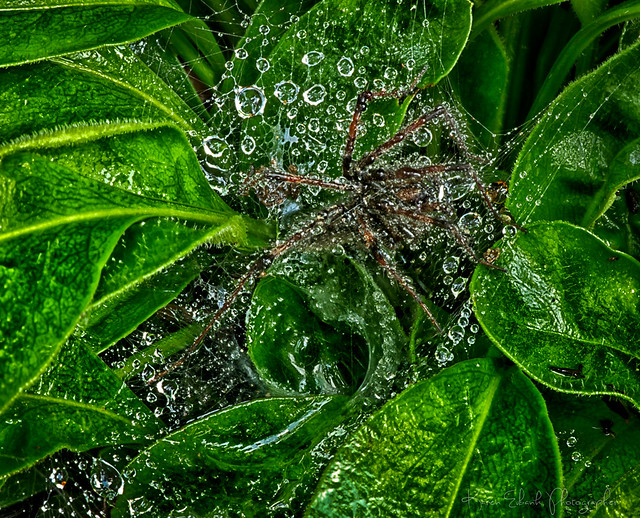 Or outside creepy-crawlers that have invaded my space . . . 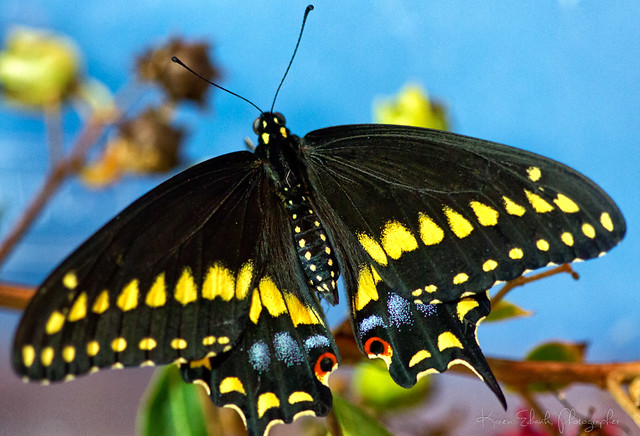 Or visions of the next day’s photographic adventures . . .
like shooting the black swallowtail butterfly that was last month’s caterpillar.

I have recently retired from a 30-year career in education in one of the best school districts in the world. I hope to spend my second life reading, writing, photographing, traveling, biking, cheering on my favorite baseball team (the St. Louis Cardinals), and soaking up glorious sunshine. In my spare time I enjoy playing with my pet tarantulas, trying out new flavors of chewing gum, and knitting socks for prison inmates. I'm almost positive that in a past life I was one of the Seven Dwarfs (most likely "Grumpy"), and in my next life I'm going to be either a taste tester for Hershey's or a model for Victoria's Secret's new line, "Bloomers for Boomers." I want to travel country back roads, singing Vanilla Ice songs at every karaoke bar and rating bathroom cleanliness at every truckstop. And someday I plan to own a private beach where skinny girls aren't allowed. I want to be a writer when I grow up. "Our truest life is when we are in dreams awake."--Henry David Thoreau
View all posts by icedteawithlemon →
This entry was posted in Humor, Photography, Sleeplessness and tagged Insomnia, photography, weird thoughts. Bookmark the permalink.