Goldilocks Gets a Buzz … And a Lesson in Tolerance, Too

Posted on July 2, 2014 by icedteawithlemon

Once upon a time, a little girl in a little town quietly walked upon a stage in front of a crowd of strangers and bravely relinquished her long, golden ponytail to the snip, snip, snip of the scissors. And then that little girl in that little town timidly challenged the members of the crowd to do the same–to grow their hair long enough that it, too, could be cut and donated to Locks of Love, thereby giving back to other brave children somewhere a little of the confidence and normalcy that disease had so ruthlessly stolen from them.

My husband and I were in that crowd, and my husband was moved by the little girl’s plea.

“I could do that,” said my husband.

“Yeah, right,” I said, being the supportive and encouraging wife that I always am. “The guy who never lets his hair grow long enough to touch the tops of his ears is going to grow hair long enough to donate to Locks of Love? No way–you can’t, and you won’t.” And then I laughed and laughed at his foolishness, momentarily forgetting that this man’s stubbornness is almost equal to my own.

“Just watch me,” he replied.

And that was all it took–not even a double dog dare was needed. He strutted his manly self to the stage and accepted the little girl’s challenge–without realizing his crew cut would have to grow to at least a 10-inch ponytail before it could be donated, without realizing it would take TWO YEARS for his hair to reach that length, and without realizing that he would have to dye his hair before donating it because children’s wigs aren’t generously sprinkled with gray.

It was a long, LONG journey from crew cut to ponytail–but an eye-opening one as well. In the beginning, it wasn’t that big of a deal–in fact, when his hair reached that slightly unkempt, tousled stage, it was even kind of cute (Zoinks, Shaggy!). Unfortunately, that stage didn’t last long enough, soon to be replaced by the unmanageable (hideous, to be exact) “Bozo” stage when the longer his hair grew, the thicker and curlier it became–and the more it stuck out in every direction all over his head. A kind, sympathetic wife would have lied and told him it was still cute–unfortunately, he was not married to that woman.

By the end of the first year, his curly hair was finally touching his shoulders and starting to calm down, and Bozo was mercifully replaced by Goldilocks. Suddenly and much to his delight (and my annoyance), he was being hit on by strange women (and men), all of whom were running their fingers through his beautiful curls (often without asking permission first) and begging him not to cut it. (Really? If you think it’s so great, why don’t you just trot your flirtatious, brazen hussy self over to my house where you can gather keepsake clumps from my clogged shower drains and sinks and counters and hair brushes and pillowcases and refrigerator and every other imaginable surface?)

And then–much to my delight and his annoyance–people began mistaking him for a woman. Servers who approached our table from behind asked, “What would you ladies like to drink?” assuming, I’m sure, that no man could possibly have such luxurious hair. Again, I laughed and laughed as he tossed his golden locks and mustered his manliest, deepest voice to respond, “I’ll take a Michelob Ultra.” (It was no surprise the customer service following every such case of mistaken identity was amazing.)

Other assumptions about Goldilocks were not so amusing. Before long we started noticing the stares of strangers, some of them almost belligerent. Who was this long-haired, hippie freak who had wandered into their midst? Pothead? (“Hey, Lois, is that mari-ju-ana I smell on him?”) Faded rock star? (“I don’t know–aren’t those guys usually taller?”) Biker wannabe? (“Hold my beer, RayBob, I’m gonna whoop his long-hair, sissy ass!”) Or just another pathetic loser going through a mid-life crisis and pretending to be much younger and cooler than he actually is? (“Yeah, that’s probably it. I’ll bet he’s even got some of those sissy tattoos underneath that leather jacket. C’mon, RayBob, hold my damn beer!”)

Even worse than their assumptions, though, was that we frequently felt the need to explain to these staring strangers the real purpose behind the hair growth–and while those explanations were then greeted with smiles all around, handshakes, pats on the back and kind remarks (“Good for you!” What a great thing you’re doing!”), it was still disturbing that these strangers’ opinions mattered so much–or that their opinions mattered at all. We (and by “we” I mean you, too) say that we don’t care what others think of us, but is that really, really true when we’re certain we’re being judged unfairly?

The worst encounter, however, was the morning Goldilocks played Good Samaritan and stopped to help a fellow traveler. It was snowing heavily at the time, and the man (who also happened to have long hair) had slid off ice-covered roads, into a ditch and through a fence. As Goldilocks was pulling the man’s beat-up Mustang from the ditch, he learned the poor guy had just lost his only other means of transportation in a fire and was driving in such treacherous conditions only because of an important doctor’s appointment. As the two men prepared to part ways, a law enforcement official finally arrived–and immediately wanted to know what “you guys” were doing out in such weather. The officer assumed that because they were both “longhairs,” they were together–and obviously up to no good. It took a while to convince the officer that Goldilocks was just a passing motorist who had stopped to help. He was finally allowed to leave, but not before witnessing the officer writing the other man a ticket for “failure to maintain proper control of a vehicle” (Really? Was that really necessary?) and hearing the officer respond to two more radio calls about other accidents. My husband (a former law enforcement official himself) drove away wondering how much the man’s appearance factored into the officer’s decision to ticket him–and wondering if all the other motorists who wrecked on those treacherous roads that day were also ticketed for not maintaining proper control of their vehicles.

Goldilocks’ decision to grow and donate his hair to Locks of Love may have started as a spontaneous charitable act, but it unintentionally grew into a lengthy lesson on tolerance–and we were the star pupils. With every negative assumption aimed his way, we were both forced to consider all the times we had been not just the victims but also the perpetrators of such unfair judgments ourselves. Just as he was being evaluated for his hairstyle, I had often felt the hurtful sting of being appraised and found lacking simply because of my gender, my size, my age or even (good grief) my hair color. But how many times had we done the same thing–so quickly and wrongly assessed others based solely on aspects of their appearances that didn’t agree with our own personal tastes (their clothes and hair, their tattoos and piercings, their body shapes and sizes)? More times than it was comfortable to admit. Will we ever again wrongly judge another? Of course we will–we’re human and at least 175 degrees to the left of perfect. But will we try harder to be a little more objective and sympathetic and a little less self-righteous and smug? Yes. YES.

When his hair finally reached the desired length–two years later–Goldilocks gratefully marched upon that same stage where that same little girl was waiting with a pair of scissors to make the first ceremonial snips. Four others (all females) joined him on the stage that night, all donating their precious ponytails, too, so that children somewhere could have the wigs they needed. Goldilocks’ buzz alone yielded nine ponytails (nine!), and even though it was the toughest, sweatiest, most frustrating challenge he had ever accepted–much harder, he said, than the 2-day, 200-hundred mile bike rides he participates in to raise funds for multiple sclerosis–it was still rewarding to participate in such a worthwhile cause, to be humbly reminded of the much more difficult challenges that others face every day, and to learn a few valuable lessons along the way.

But he will never grow his hair that long again–unless, of course, I tell him that he can’t . . .

Note: Did you know that most wigs for medical patients are custom-made prosthetics? And did you know that it can take several weeks to make just one wig, that it can take as many as 6-30 ponytails or braid donations to make that one wig–or that one wig can cost anywhere from $800-$3,000 to make? If you’re interested in making a hair donation, there are several websites with further information–here are just a few: locksoflove.com, pantene.com, childrenwithhairloss.us, www.wigsforkids.org. 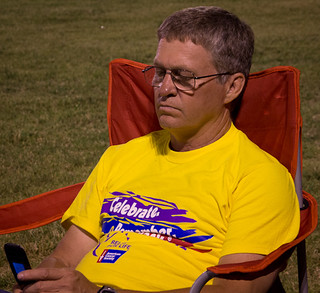 Two years ago, on the night he accepted the little girl’s challenge . . . 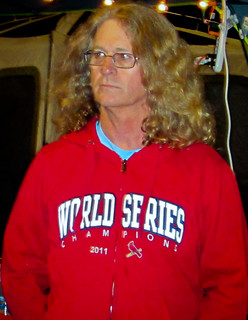 Two years later, on the night Goldilocks got his buzz . . . 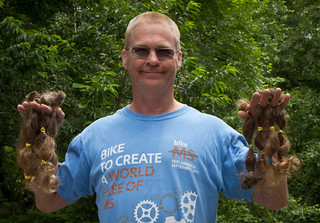 And showing off his nine ponytails the next day–what sweet relief. 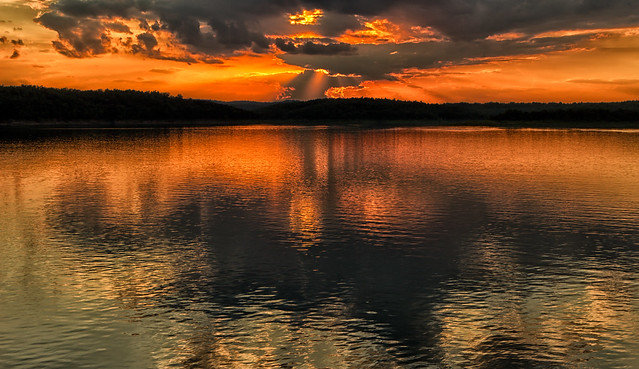 And one of my recent sunset shots . . . just because.

I have recently retired from a 30-year career in education in one of the best school districts in the world. I hope to spend my second life reading, writing, photographing, traveling, biking, cheering on my favorite baseball team (the St. Louis Cardinals), and soaking up glorious sunshine. In my spare time I enjoy playing with my pet tarantulas, trying out new flavors of chewing gum, and knitting socks for prison inmates. I'm almost positive that in a past life I was one of the Seven Dwarfs (most likely "Grumpy"), and in my next life I'm going to be either a taste tester for Hershey's or a model for Victoria's Secret's new line, "Bloomers for Boomers." I want to travel country back roads, singing Vanilla Ice songs at every karaoke bar and rating bathroom cleanliness at every truckstop. And someday I plan to own a private beach where skinny girls aren't allowed. I want to be a writer when I grow up. "Our truest life is when we are in dreams awake."--Henry David Thoreau
View all posts by icedteawithlemon →
This entry was posted in Kindness, Men, Photography, Uncategorized and tagged assumptions, judgment, lessons, Locks of Love, long hair, men, tolerance. Bookmark the permalink.

16 Responses to Goldilocks Gets a Buzz … And a Lesson in Tolerance, Too