Lions and Tigers and Oh My! Where Are the Bears?

Posted on January 8, 2012 by icedteawithlemon

Normally, following such an experience, I would generously reward my patience and bravery with a long, calorie-laden lunch (appetizer included) and several hours of mind-numbing mall shopping with no clear goal in mind other than to rid myself of the morning’s trauma.  But this was not a normal day.  It was the first Friday in January, and the forecast was predicting cloudless blue skies and temperatures in the upper 60s–now, how could a day such as that, a mid-winter gift from God and Mother Nature, be wasted indoors?  It just wouldn’t be right.

And so I decided to do something I hadn’t done in at least 10 years (probably longer) and something I had never done alone.  Putting the morning’s unpleasantness firmly behind me, I drove across town, slung my ever-present camera around my neck, and shelled out eight measly dollars for the delight of visiting the Dickerson Park Zoo.

And it was delightful.  The warm sunshine was exhilarating, the animals were magnificent, the exercise was much needed–and for a couple gloriously calming hours I was able to rid my mind of all thoughts and anxieties and fears and just be.  (Okay, for the most part–I’m too neurotic and worrisome ever to be completely stress-free.  It was close, though.)

I was the only adult at the zoo not accompanied by small children, which definitely made me stand out from the squealing masses and possibly even made me seem a little weird to everyone else.  Some parents admonished their children to “Get out of the nice lady’s way” as I was shooting photos, while others eyed me suspiciously and deliberately steered their little ones clear of me–was this a commentary on today’s society that I (a mother of three boys, an educator for 30 years, and a good person, I swear) might represent “stranger danger”?

I didn’t mind the aloneness, though.  The crying infants and their nap-deprived siblings were somebody else’s concern, and most of the time their distant screams blended in with the elephants’ trumpet and the monkeys’ chatter.  And when those shrieks did manage to pierce the background noise, they simply reminded me of all those long ago days when I visited this same zoo with my own small children.  Back then it was their excited squeals that penetrated the calm, their never-ending questions that challenged me (Why does the maned wolf smell like a skunk?  What do rhinos eat?  Why are they called spider monkeys–do they eat spiders?  What would happen if I fell in the lion’s den?  Can we ride the camel now?), and it was their sticky little hands that sought mine for momentary reassurance before their scrawny little legs once again scurried them down the winding sidewalk to the next exhibit.

But that was long ago.  On this warm January day I was a solitary, budding photojournalist on my first safari in a concrete wilderness, squatting and kneeling and climbing and carefully side-stepping landmines (cleverly disguised as squishy green “bombs” left by free-roaming ducks and peacocks).  Some of my targets didn’t wish to be shot, hiding in their caves (Darn hibernating bears! Didn’t they realize what a beautiful day they were missing?) or slithering away behind finger-smudged glass panels.  And most of the others were too busy napping and soaking up the sunshine to be bothered by the weird camera lady who wouldn’t quit whistling and clucking and cooing and waving in their direction.

But oh, the rest of them!  Regal and nonchalant, they occasionally favored me with a bored glance in my direction just as I took aim . . . and by doing so, they filled my heart with such happiness and gratitude, and they filled my soul with peace and contentment.  It was a beautiful way to end a stressful day at the end of a stressful week, and the memories of that afternoon will hopefully provide a mental oasis when January’s snowflakes eventually fall (as they surely will).  And if not, I may just have to go back to the zoo again . . . and again.

If you’re feeling weighted down by your own worries or just suffering from a severe case of the winter blahs, might I suggest you steal a few hours and go on safari, too?  Earplugs are optional and a camera is highly recommended, but an appreciative heart is a definite must (as well as a keen eye for dodging those squishy green landmines).  Take a walk in the sunshine, breathe deeply . . . and smile.

“Our task must be to free ourselves… by widening our circle of compassion to embrace all living creatures and the whole of nature and its beauty.”–Albert Einstein

Dead Grass: When you're in the right frame of mind, even dead vegetation can be beautiful. Photo by Me, taken on 1/6/12 using a Canon Rebel T3i and 100 mm macro lens. 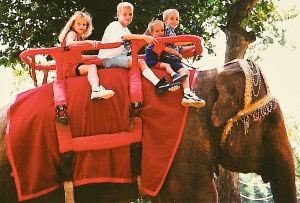 A picture of my three sons and a family friend at the Dickerson Park Zoo--I think the year was about 1994.

I have recently retired from a 30-year career in education in one of the best school districts in the world. I hope to spend my second life reading, writing, photographing, traveling, biking, cheering on my favorite baseball team (the St. Louis Cardinals), and soaking up glorious sunshine. In my spare time I enjoy playing with my pet tarantulas, trying out new flavors of chewing gum, and knitting socks for prison inmates. I'm almost positive that in a past life I was one of the Seven Dwarfs (most likely "Grumpy"), and in my next life I'm going to be either a taste tester for Hershey's or a model for Victoria's Secret's new line, "Bloomers for Boomers." I want to travel country back roads, singing Vanilla Ice songs at every karaoke bar and rating bathroom cleanliness at every truckstop. And someday I plan to own a private beach where skinny girls aren't allowed. I want to be a writer when I grow up. "Our truest life is when we are in dreams awake."--Henry David Thoreau
View all posts by icedteawithlemon →
This entry was posted in Gratitude, Simple Pleasures, Uncategorized and tagged animals, peace, personal, photography, random, zoo. Bookmark the permalink.

14 Responses to Lions and Tigers and Oh My! Where Are the Bears?